I was on my way back to Nashville after spending my birthday with family in Union City.  I stopped at the store in Kutawa, Kentucky to get a 6-pack of Deschutes Pale Ale.  It's one of my favorite Oregon beers and you still can't get it in Tennessee.It was there that I got my first, ”Be Safe.”  The cashier said it to me after I bought the beer and was headed out the door. I knew she wasn’t talking about my drive.  That was when I decided to document these times.

I turned 50 years old the day before.  I had driven to Union City from Nashville on March 15th.  I didn’t have any birthday plans so I thought I would spend it with family.  But that weekend the seriousness of the virus seemed to accelerate at an exponential rate.  Bars and restaurants were being closed down across the country.  The president had gone from calling it a hoax a month before, to giving daily updates by this weekend.  My photography jobs for the spring were cancelling and at a crazy pace.  My niece and nephew would be finishing their college semesters remotely, my youngest niece would not be going back to high school until at least April.

I returned to Nashville today and tried to buy some things I needed.  Things I failed to find at Kroger and Walgreens were surgical gloves, rubbing alcohol, and toilet paper.

I spent most of the day inside.  For the past year I have been delivering food for Uber Eats on days that I did not have photography work.  All reports are that delivery services are going to be extra busy.  I picked up a pizza and some booze and spent the day drinking in place.  I turned on the Uber Eats app even though I had no intention of taking anything today.  It seemed really busy.  I found a box of latex gloves in my first aid supplies.  I guess I will try delivery tomorrow.  No sense in not making money if I can.  Currently 58 cases in Davidson County at 9:45pm, 24 in Williamson County, next one over.  Definitely the biggest concentration in TN.

I just saw a report of tents going up at Nissan Stadium, possibly for drive through testing.  I might have to start documenting with my camera tomorrow.  I didn’t take many photos during the aftermath of the tornado, I felt like enough people were doing that and I didn’t need to be in the way.  But I took a lot during the flood.  I now wish I had taken more tornado pictures.  I think I will from here out.

Yesterday I drove for Uber Eats, one delivery at lunch and then didn’t turn the app on until 5.  I stayed on until 8:30 and made as much as I would in about 8 hours normally.  I’ve got some hand sanitizer in the car and most of the restaurants have it available as well.  I guess I’ll keep doing Uber Eats until it doesn’t feel safe anymore.  I'll probably start wearing the gloves soon.  Still looking for gloves, masks, rubbing alcohol, and toilet paper.

I saw the tents at Nissan Stadium for the drive-thru testing.  They’ve been set up for 2 days now but no testing being done yet.  They are just waiting.  I think it was 110 cases in the county today.  It was.  I just read about the first death in the county, a 73-year-old man.

My mom messaged me today and it is apparent that she is pretty worried about my being in Nashville right now.  We are the epicenter of the state with 140 cases this morning.  I drove for Uber Eats again today.  The amazing thing about this is how empty the streets and interstates are.  It’s like driving in the eighties.

I did a few deliveries yesterday.  Mostly people are requesting to have it left at the door.  I’m cool with that.  I went down to Lower Broadway and took a few pictures.  Pretty barren.  There were a few others out taking pictures and videos.  I saw some musicians playing to an empty room, live-streaming a show from the Tin Roof. 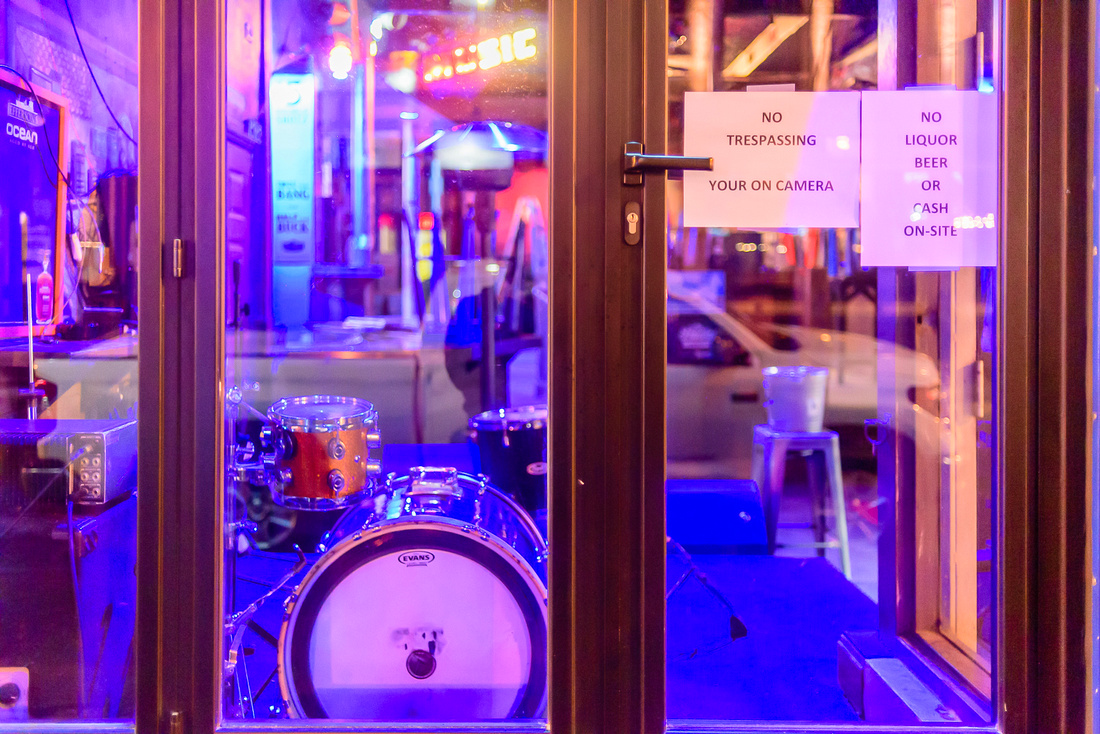 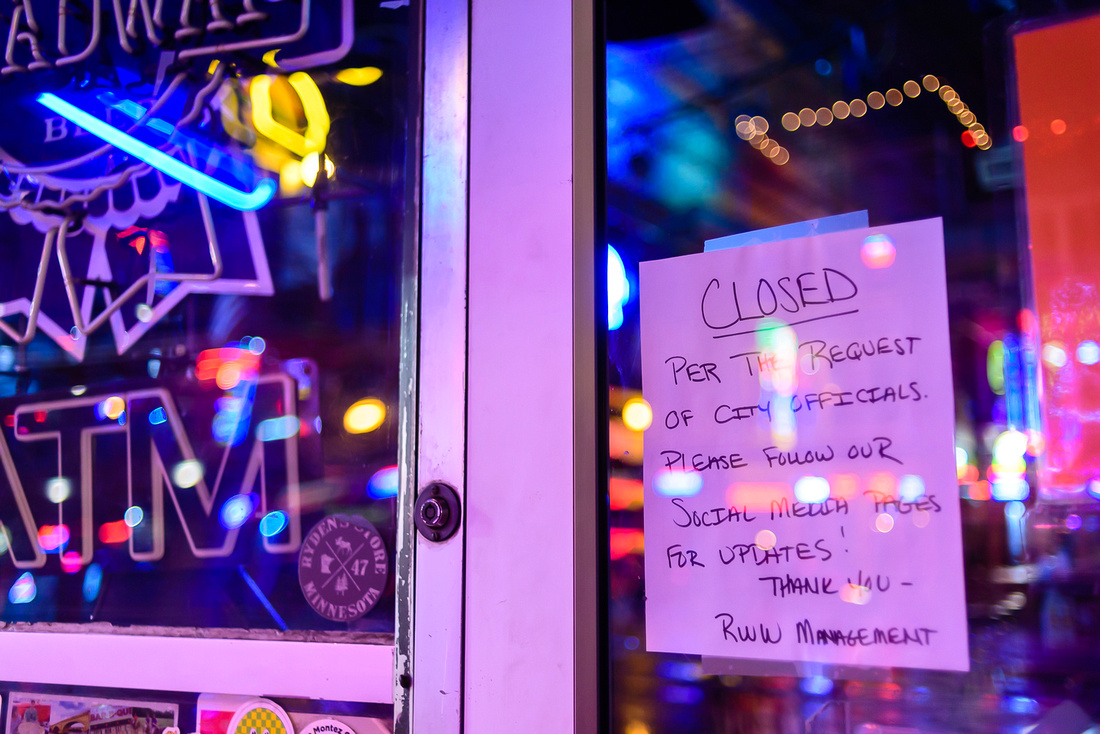 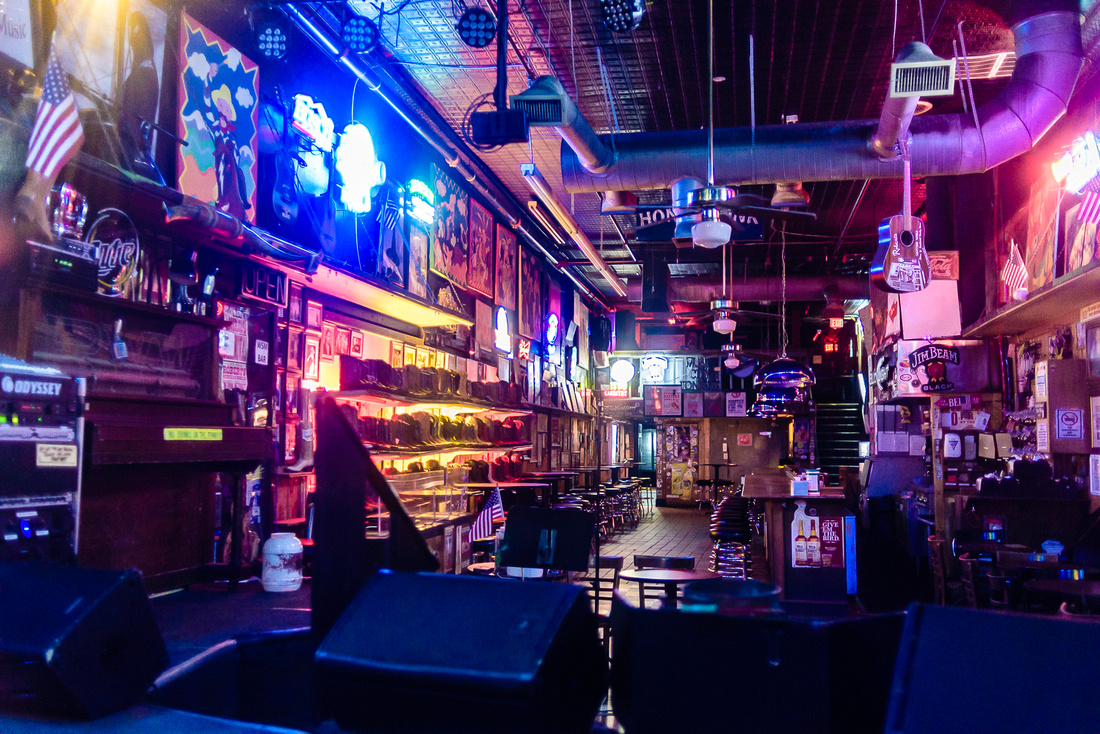 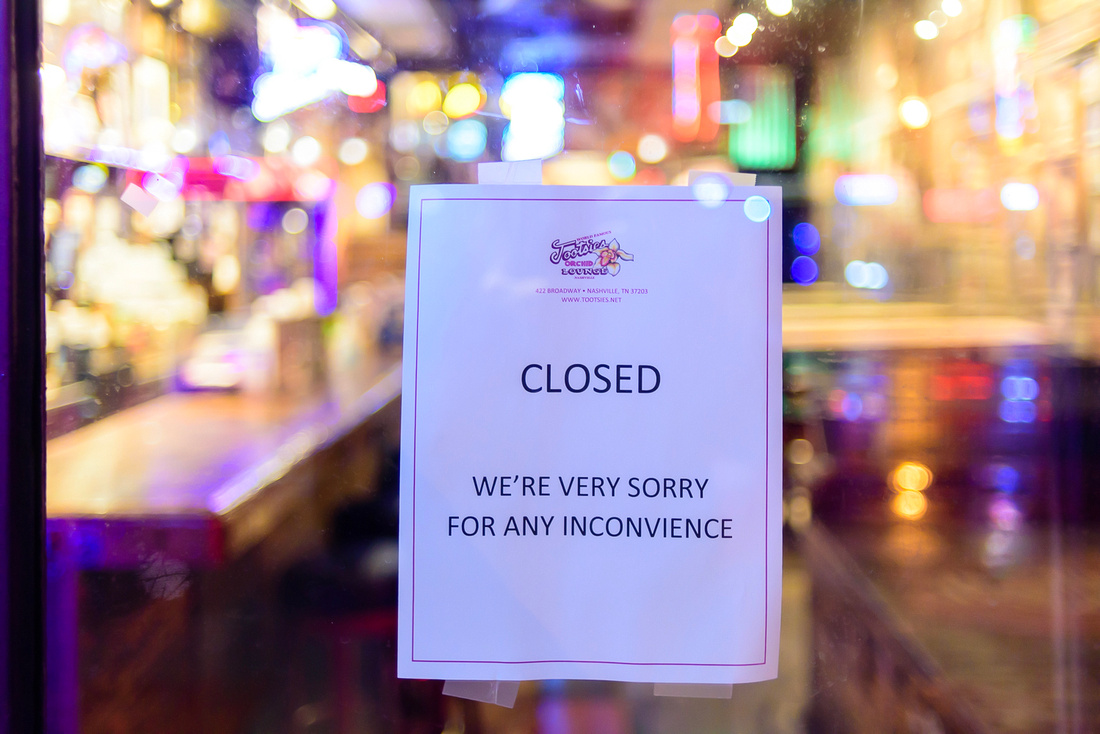 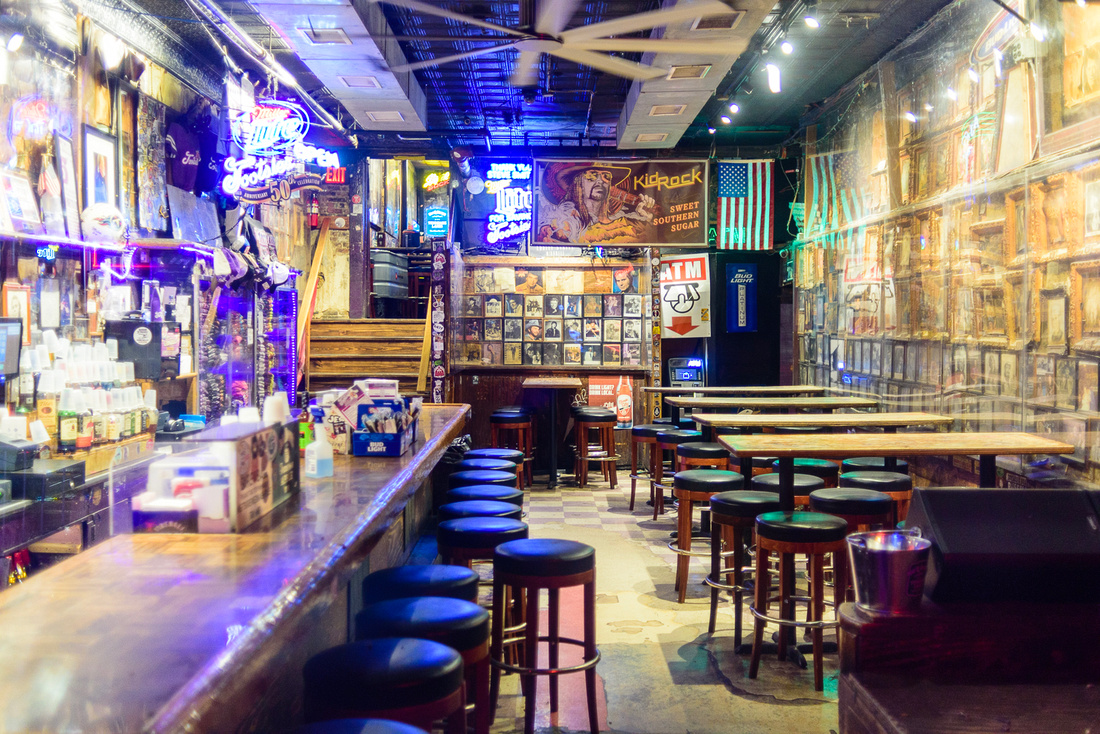 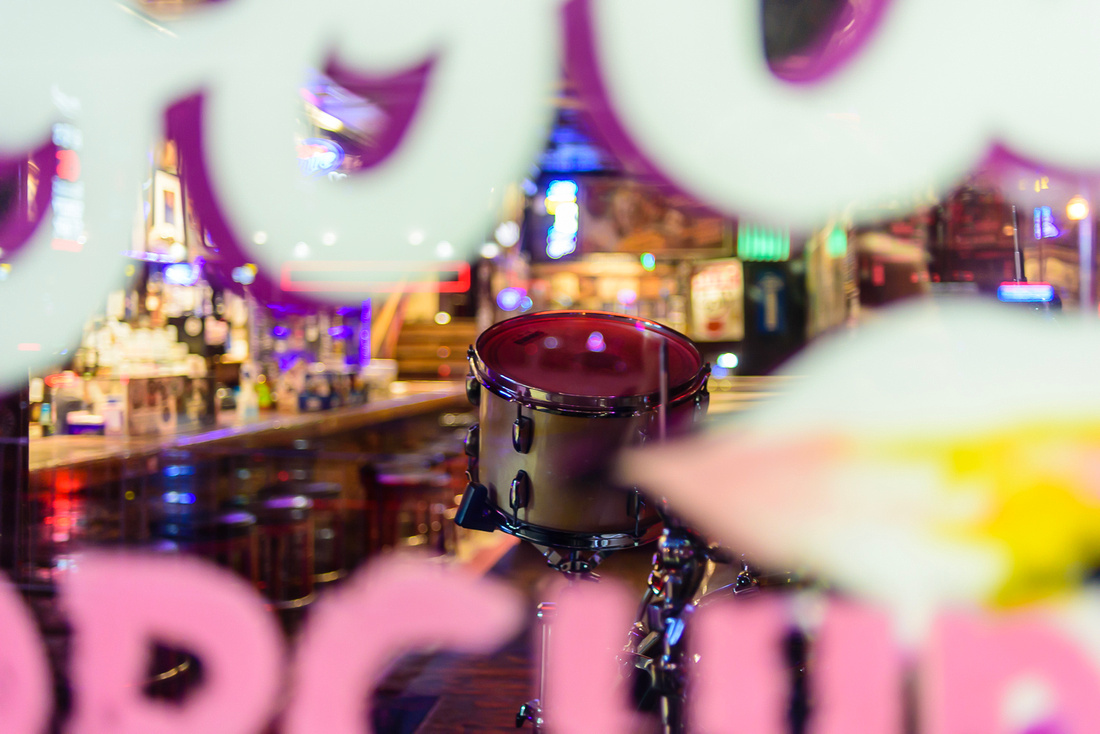 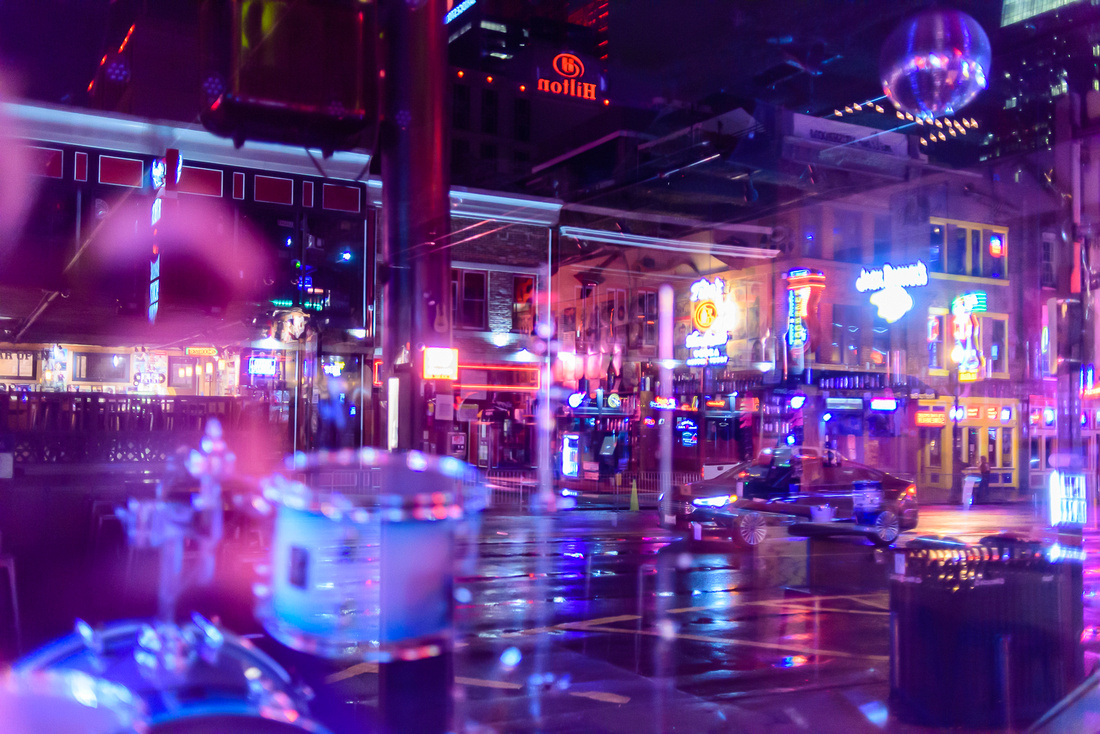 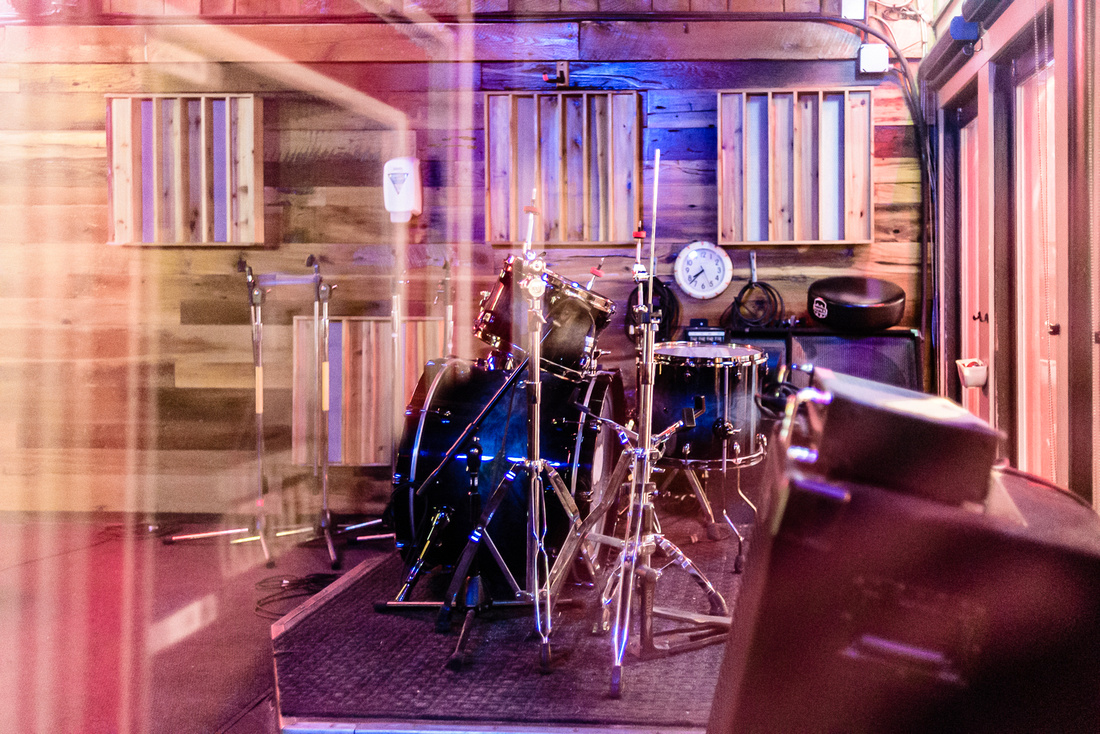 The tourists are gone, though the homeless that depend on their handouts are still here.

Nashville only jumped by 5 cases overnight.  From 179 to 184 this morning.  They have 3 drive thru testing centers set up but none of them are open yet.  It will be interesting to see what the numbers are when they start city-wide testing.  I’ve seen health workers say the virus has already spread here but we just haven’t seen it yet.  Some have said to expect a spike this week. 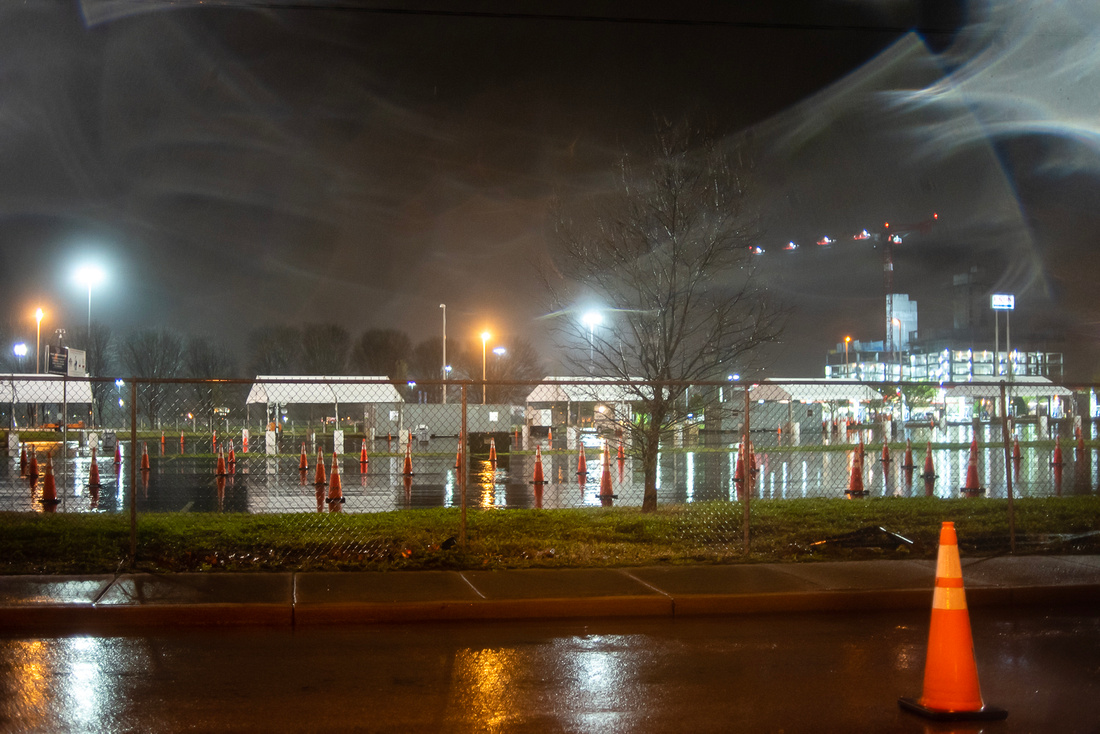 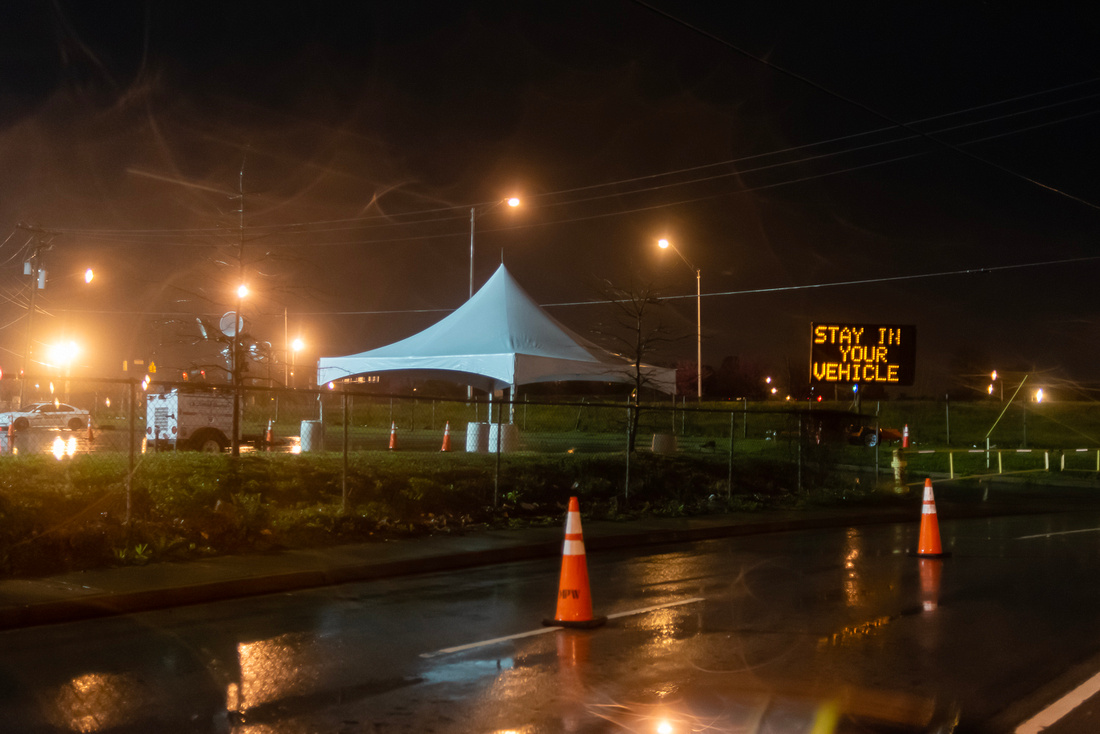 Did a few more deliveries today.  The president thanked delivery drivers in his virus update today.  Ha.  He thanked healthcare workers and first responders, then he went on to truck drivers and then to restaurant workers and delivery drivers.  I never imagined that Uber Eats would elevate me to Rosy the Riveter status.  But it's not my camera that’s keeping what’s left of the economy going.  There are a lot of restaurants out there that are really thankful for delivery services right now.  Happy to keep helping out as long as I can.